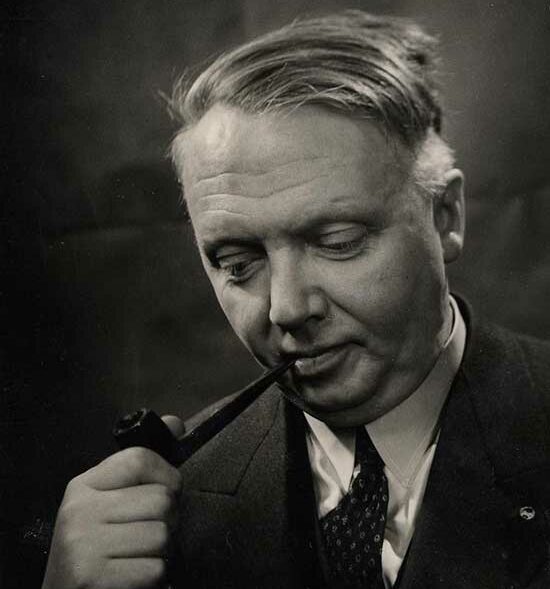 Hendrik Andriessen was born into a veritable artists’ dynasty. His mother Gezina Vester was a painter and his father Nicolaas was an organist and choral conductor. Hendrik’s brothers Willem and Mari were respectively a concert pianist and sculptor.
From 1914 Andriessen studied organ with Charles de Pauw and composition with Bernard Zweers at the Conservatorium van Amsterdam. However, he was mostly influenced by Alphonse Diepenbrock in his development as a composer.
Andriessen had a strong predilection for French music, so it comes as no surprise that César Franck’s organ works were a great source of inspiration for him. He also kept in personal contact with composers such as Albert Roussel, Gabriel Pierné and Darius Milhaud. With regard to German composers he was particularly captivated by the song composer Hugo Wolf. He also frequently performed as a song accompanist.
Andriessen taught theory as a principal subject at the Conservatorium van Amsterdam, as well as teaching organ, improvisation and Gregorian chant at the Roman Catholic School for Church Music in Utrecht. He also held the post of organist and conductor at the Utrecht Cathedral. In 1937 he became both director of the Utrecht Conservatoire and professor of composition at the Conservatorium van Amsterdam. During the Second World War Andriessen was severely restricted in his musical activities as a consequence of refusing to become a member of the Kultuurkamer (Chamber of Culture). He was even interned for some time in the Haaren and St. Michielsgestel camps.
Andriessen was director of the Royal Conservatoire of The Hague from 1949 until 1957 and professor of musicology at the Catholic University of Nijmegen from 1952 until 1963. Albert de Klerk, Herman Strategier and Jan Mul were among his most prominent students. He was also the father of the composers Louis Andriessen and Jurriaan Andriessen.
Alongside his organ compositions (for instance, the Sonata da Chiesa of 1926 and the Passacaglia of 1929), his church music (masses with and without organ), his songs (for instance, his Miroir de peine of 1923, composed to poems by Henri Ghéon, and Trois Pastorales of 1935, to poems by Arthur Rimbaud) and orchestral works, of which the Variations and fugue on a theme by Kuhnau (1935) and his Fourth Symphony (1954) enjoy particular renown, Andriessen’s chamber music works occupy a completely unique position. Following his unpublished Violin Sonata (1915) and posthumously published Viola Sonatina (1924), the Sonata for cello and piano (1926) was the first sonata that Hendrik Andriessen released for publication. From this Sonata it is possible to trace an organic development via the Second Violin Sonata (1931) and the Three Inventions for violin and cello (1937) to the piano trio of 1939.

In terms of its architecture the Sonata for cello and piano, composed in the striking tonality of F# minor, presents itself as an independent elaboration of César Franck’s cyclic principle. Any resemblance to Willem Pijper’s germ-cell technique is at best superficial in this context. There is also clear use of bitonal voice-leading. On the other hand, Andriessen does not yet employ twelve-tone techniques, as he was later to do in works such as the Three Inventions.
Regarding its mentality, the Sonata displays a close affinity with the chamber music of Gabriel Fauré – another French composer much admired by Andriessen – in its eschewal of every form of outward display. The softly whispering conclusion of the elegant, autumnal final movement clearly bears witness to this.

Hendrik Andriessen performed the Sonata himself with cellists such as Thomas Canivez (who gave the première of Matthijs Vermeulen’s First Sonata) and Marix Loevensohn (who performed Henriëtte Bosmans’s Sonata and Willem Pijper’s First Sonata).
Besides the Sonata added here to this catalogue, Andriessen later also composed the Sonata for solo cello (1951), the Canzona with orchestra (1965) and the Concertino with orchestra (1970).

Listen to part of the Sonata: